I feel a viola joke coming on The Beecham story and some of the other comments remind me of another VPO story - they were playing for an amateur? Eventually one of them told him to shut up and get on with it, or they would follow his beat! Buri - your comments on Ashkenasy are interesting. My perception as a listener was quite different as I heard some very fine broadcast performances with him conducting. Something which has always intrigued me is how different the perception of listeners and players can be.

Especially listening 'blind' - when listening to radio which I used to do a lot or recordings. Another thread, sometime, maybe David - your tale reminds me of a televised master class when Zubin Mehta started the Israel PO in the final section of the Rite, and then walked off the podium.

The orchestra played through to the end, flawlessly. I trust the lesson was not lost on the students. My definition of a mediocre or worse conductor - one who gives the orchestra lots of 'help' where they don't need it, and none where they do. I have had experience of an egregious example of that species.

His contract was terminated sooner rather than later. Fortunately, other school music directors I have had as conductors have been a pleasure to work with. At the other end of the scale, some years ago I was playing cello in a run of Verdi's "Nabucco". Half an hour before the opening performance word came that the conductor had been taken ill and wasn't able to attend.

When he heard about the problem he offered his services to save the day, even though it meant he would be sight-reading the score of an opera he had never conducted but otherwise knew. The concertmaster guided him through it, indicating entrances, tempi, pauses, and a couple of cuts.

The performance was a great success, although 10 minutes longer than scheduled, our stand-in conductor having wisely decided that a conservative approach to tempi would be best under the circumstances. The regular conductor recovered from his illness, returning the next day to conduct the rest of the run. Anyway, there was a very, very crucial bassoon solo, and during the rehearsal, the bassoonist asked the conductor if he the conductor would give a cue so that the bassoonist would come in in the right place.

The conductor wrote it down in his score. But that evening, the conductor did not use a score and conducted from memory. He forgot to cue in the bassoonist at the crucial moment, and as a result it wrecked the key passage in the performance. After the performance, the conductor was looking backstage for the bassoonist, found him, and started cursing him out. Yes, he really did wag the stick at some special event or other. Watch the above clip where you have a tight rhythm section and yet you have conductor to beat time for the orchestra.

A half decent musician should be able to follow and keep a beat! The trombones came in the horns didn't. 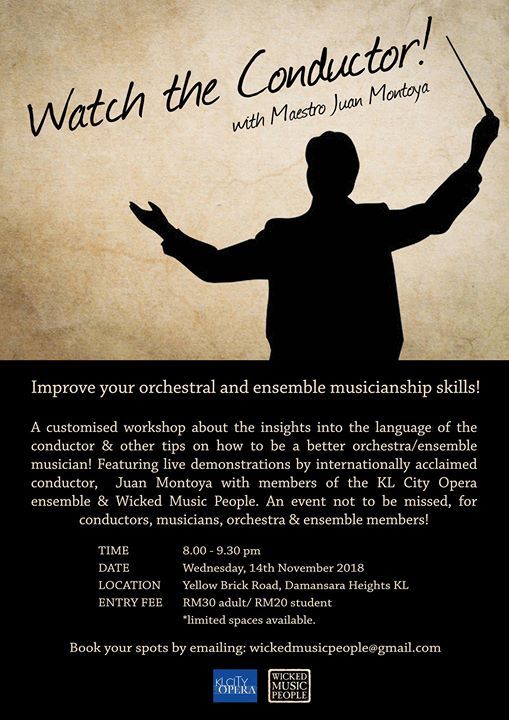 Chaos ensued and thing were falling apart. The great concertmaster continued playing by memory, gazing at the uppermost balcony, and beating out the measures and cues with his scroll. All the other section leaders quickly followed suit. In a very few seconds things were on track again. Having said that - if it's a very big orchestra the players at the back can be far enough away for there to be a noticeable time lag. In that case, if you trust the conductor, he can be worth following.

There are also a few conductors who can convey something extra to the players and are worth watching, however most can be safely ignored. More than that - there are a lot that it's safer to ignore!

They are victims. Having embarked on their career, whilst in the classroom, they are cut off from colleagues of equal or superior status. This isolation means their daily performance will for years and years remain unobserved by anyone who might have the wisdom to put them right should they be going wrong. If the pupils do badly, it's always easy to blame THEM!! Orchestral players are subordinate to those mighty conductors. Heaven help any of them should they venture to offer criticism; though now and again a concertmaster might get away with a sly dig!

Sadly, it's always the conductor who gets the credit if a performance goes well, and the band that takes the blame if it does not. When I was a member of a youth orchestra, one bright spark asked a tutor what one is supposed to do if the conductor goes wrong. When everyone listens and follows the tune many a disaster can be avoided. The orchestras he conducted later in life generally followed the concertmaster and ignored his gesticulations. He started to pick up his baton much too early; I made eye contact and slightly shook my head.


Baton down. About bars later, baton up. I shook my head. At the correct point, baton up, I nodded my head, he smiled and brought us in correctly. The "bouncing up and down" must have misled you. I always found Norman a sympahetic accompanist? This was Alun Francis, and I wouldn't make the same claim about him! He was a very good conductor. I had enormous respect for him and I think the feeling was mutual. Inconsequential chatter by the conductor when he should be working with the orchestra on the music. Low voice projection, which can cause misunderstanding of what the conductor is saying, especially by players towards the backs of the sections.

Related to the previous, failure to clearly enunciate letter labels in the score that end in the "ee" sound - so, "did he say B or D? The solution is to say things like "B for Bertie", or "D for David", and then there is no ambiguity. Having said that, we had a conductor who memorably announced the letter label "O" as "O h for a muse of fire that would ascend the highest heaven of invention" which was also the informal motto of a firm of patent attorneys.

More seriously, poor time management on the part of the conductor, especially when rehearsal time is strictly limited, and we end up by not adequately rehearsing the really tricky bits. The conductor told us the day before the concert to memorise the one page and watch him the whole time during the concert. He can be quite weird at times, so when we tried to play during the sound check, he would randomly go subito forte or piano, and there were times when I thought that the way he did it was too much, and didn't sound nice anymore. But, what could we do? It was such a delicate piece, so if one of us didn't watch him properly, it would definitely stick out really obviously!

And we knew then that we would really have to watch him closely during the concert because we were sure he wouldn't conduct it the way we had rehearsed for the past two and a half months! Principal conductor suddenly taken ill no cheers now! Does very well and continues for all concerts for three weeks. Conductor recovers no groans!


Number three viola looks at him and says "where the hell have you been, I haven't seen you for three weeks! I once played in a BBC Promenade concert with a foreign conductor who was the orchestra's principal conductor. No name of orchestra or cond. He then said we were playing out of time, even though we assured him we were following his eratic beat.

Fortunately, my Navy career has afforded me opportunities to conduct more frequently than if I were a civilian musician. Also, the high quality of musicianship and the wide variety of performance settings serve to accelerate my education. When conducting the Navy Band, for instance, if something is not working in a rehearsal it is a fair assumption that I am doing something wrong! As I've stated, the skills any fine instrumentalist needs to perform well are the same skills needed by a conductor. However, there are a few critical differences in approach that I feel we must be aware of in order to succeed.

First, the instrumentalist is required to be aware of his or her own musical contribution, whereas the conductor must take the "big picture" view. This ability to control the soundscape created by a large ensemble takes considerable time and patience. As players, we are hyperaware of what is happening right around us, but we seldom know what the blend is like out in front where the audience sits. The conductor must literally let go of the fine details and put his effort into blending and balancing opposing forces to create the intended product.

One cannot create what cannot be conceived, so a conductor must put substantial time into score study to build an aural picture in his mind, line by line. Another difference is that a successful instrumentalist must submit to the will of the conductor if there is to be any sense of ensemble. The conductor, conversely, IS that will. However, will alone is not enough.

The likelihood of profiting from willpower depends upon the conductor's ability to apply a constantly changing mix of humor, anger, disappointment, pleasure, and compliments--the whole range of human emotion used in the correct amount at the right time to inspire the ensemble. No successful conductor is a "one trick pony," achieving success by always being nice or always being caustic.

While it is perfectly reasonable to discuss fees for any job, I believe she woefully misunderstands the role of conductors and orchestral musicians. Having spent 14 years as a cellist in the London Symphony Orchestra, 21 years as its managing director, and the last four years as executive and artistic director of Carnegie Hall, I have been centrally involved with this subject for 39 years.

Ibbotson says that "while orchestras can play unaided, it is helpful if someone can follow a score and beat time clearly", asserting that "music, given players sufficiently accomplished, speaks for itself". Then she says: "Almost the last place you look as a musician is towards the conductor … You look up at the pertinent moments much in the same way that you would check a speedometer while driving.

The reality could not be more different. Among the key skills of top-quality orchestral players is their ability to watch the printed music at the same time as watching the conductor, while also listening to other sections of the orchestra — a sophisticated job of multi-tasking.

In addition, performance art that involves a substantial ensemble — be it in the theatre, film, ballet, etc — almost always depends on a singular vision or interpretation if it is to have any real impact on an audience. It is the role of the conductor to create this. Whether one likes the interpretation or not is another matter, but to say that an important musical experience can be created largely by getting the notes right is meaningless — that would be a mechanical achievement, not an artistic, emotional or inspirational one.